Finally! We can now get "custom URLs" for our Google+ accounts! As of this morning you can now find me at the nice and easy URL of:

One of the supreme annoyances of using Google+ has been the horribly ugly long URLs you have had to use for your profile. You couldn't give people an easy URL to find you on the service and there was no way that normal people would realistically remember the long numbers. Google rolled out "custom URL" support for some brands and celebrities earlier but all of us "regular users" were left with the ugly URLs.

That changed yesterday and was noted with a post on Google+, "Expanding the availability of custom URLs". Tipped off to the change by Neville Hobson's post on G+, I went into my Google+ profile and nicely found this message waiting for me at the top of the page

I was delighted to see that "+DanYork" was being offered to me and so I clicked the "Get URL" button to see this screen: 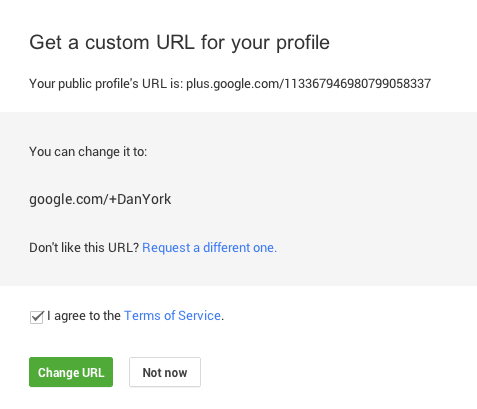 One more click brought me to a confirmation screen nothing that I can't change the URL or transfer it to anyone else: 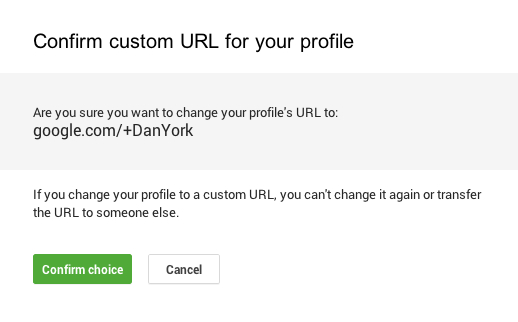 And that was it! My Google+ profile now is at https://plus.google.com/+DanYork/.

Very cool to see and this will definitely make it so much easier to refer people to my profile on the service (and therefore will make it much easier for people to find me and use Google+).

Now, what I really want is this kind of custom URL for my Google+ Pages, and I'm seeing from comments on G+ that some people have this for their pages already. The post from Google says the criteria for custom URLs will be:

If your profile meets the following criteria, you’ll now be able to claim a custom URL:
- Has a profile photo, and
- Has at least 10 followers, and
- Has an account that's at least 30 days old

Meanwhile, any brand or business that has a linked website or is a verified local business can claim a custom URL for their Google+ page.

I do have linked websites for some of my Google+ Pages ... but I'm not yet seeing the option to get a custom URL. As Google indicates, this feature is being rolled out this week, so hopefully I'll see it soon.

I've been using Google+ a great amount these days, and so I'm thrilled to see this new feature that will make it much easier to find people and to refer people to my profile and content.

What about you? Have you been offered a custom URL on Google+ yet? Have you claimed it?

Working in a home office, I often like having music playing softly (or sometimes loudly!) in the background. In the interest of hearing more music than just what I have in my own collection, I've been trying various streaming services and a while back started paying the $10/month for Spotify Premium. I've been generally rather pleased and have enjoyed discovering some new artists through both what friends are listening to as well as Spotify's "Discover" tab. (And yes, I've actually purchasedsome music via iTunes as a result of hearing it on Spotify.)

With Apple promoting their new "iTunes Radio" I naturally had to try it out. I listened to a couple of the default "stations" and was pleased by what I heard. My nice stream of background music was interrupted by an ad for a new album available for purchase in the iTunes Store.

It's not this particular album being advertised that annoyed me... it was that there was an advertisement. I have background music playing that is, well, music, not people speaking. Music fades into the background and I find it strangely helps me concentrate. Speaking interrupts my concentration.

Looking into iTunes Radio more I noticed that the option to go "ad-free" is there if I want to subscribe to iTunes Match. Now at $25/year this is chaeper than Spotify Premium, but requires that I give Apple access to my entire iTunes library to store it up in "iCloud".

I'm not sure I really want to do this.

The paranoid-about-privacy side of me is leery of what information I'm giving to the big corporations out there, and I'm not sure I'm ready to embrace the convenience of having "all my music with me everywhere" while sacrificing the privacy of the info about all my music.

Of course, who knows... I may have already done this some time in the past with some various iTunes terms of service that perhaps said all my data would be sent to Apple. I don't honestly know.

In some digging around online, though, it appears that even if I gave Apple access to all my music, I'd still have a less-than-stellar user experience. As Alex Heath writes over at Cult of Mac about his disappointment with the service:

Apple still told me what station I was listening to over and over. I know I’m listening to the “Pure Pop” station, Apple. You don’t need to play a 9-second clip in between songs telling me so. What purpose does that serve the listener when they already know what station they chose?

When Katy Perry’s new “Dark Horse” single (which isn’t that good, by the way) came on for the first time, a 3-second chime played telling me that it was an official iTunes Radio “pick.” Okay. Why not just put that information in text form next to the album artwork? Do I really need my listening experience interrupted with that audio blurb?

I’ve been a Spotify Premium subscriber for over a year now, and I love it because it I hear nothing but the music I want playing.

That's it in a nutshell.

(And obviously I'm willing to pay for it.)

So for now I'll stick with Spotify... maybe in some future release I'll give iTunes Radio another try if they ever get to more of an "all music" experience.

What has your experience been? Obviously, based on stats from Apple's recent event that said over 1 billion songs have been played on iTunes Radio, people are using the service!

A Critical Audio Setting In Live Streaming With Google+ Hangouts On Air (That I Missed!)

Do you have the correct audio stream configured in Google+ Hangouts On Air (HOA) when you are doing live streaming of an event using a HOA? When we ran our live stream out of ION Krakow on Monday, I mentioned that we hit the undocumented 4-hour maximum time limit, but we actually had a larger issue that for the first 1 hour and 45 minutes -

our live stream's audio was terrible!

It turned out that while I had correctly configured Google+ HOA to use the proper video setting for the "Wirecast Virtual Camera", I didn't realize that I had to separately configure the audio seeting to specifically pull in the audio stream from my capture device: 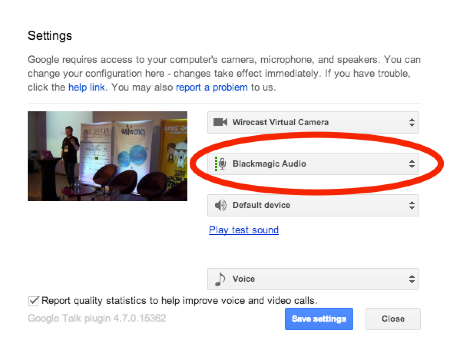 I just mistakenly assumed that HOA would pull the audio from the camera... but instead it was getting the "Default microphone", meaning the mic on my laptop.

Interestingly, we didn't discover this in testing because when I was doing the testing with a wireless microphone I was sitting at my laptop and so naturally the audio quality was excellent. I did walk up to the front of the room at one point but even then there was no one in the room and my voice could be heard well.

The good news is that I had a separate recording going from the house mixer into my Zoom H4N, so I have a complete audio track for the event. Now I just have to go back and create a new video recording, stripping out the old bad audio track and syncing the backup recording. Not ideal but will at least give us videos of the sessions that we can upload.

The bad news is, of course, that the experience of the initial viewers was quite poor and I'm sure some of them did not stay around to watch more of the session under the assumption it would remain that way.

Why did it take so long for us to fix it?

Well, I was the one operating the livestream and I was speaking at the beginning and then moderating a panel discussion, so it was purely the case that I wasn't in a position to be able to diagnose and sort out the fix. During the break I finally had a chance to do so.

It was also a valuable lesson in monitoring. To look at the audio levels I was watching the graphical meters in Wirecast but I wasn't watching the level in the Google+ HOA screen! That was ultimately how I realized what was wrong. It also pointed out that we need to be running a second machine that is watching the actual livestream so that we can hear the issues ourselves.

All in all a valuable set of lessons that I'll be adding to my checklist for the next time we do a livestream using Google+ Hangouts On Air.

P.S. The key point of the whole exercise was to prove we could livestream an event out over IPv6, which did in fact prove to be successfu1!