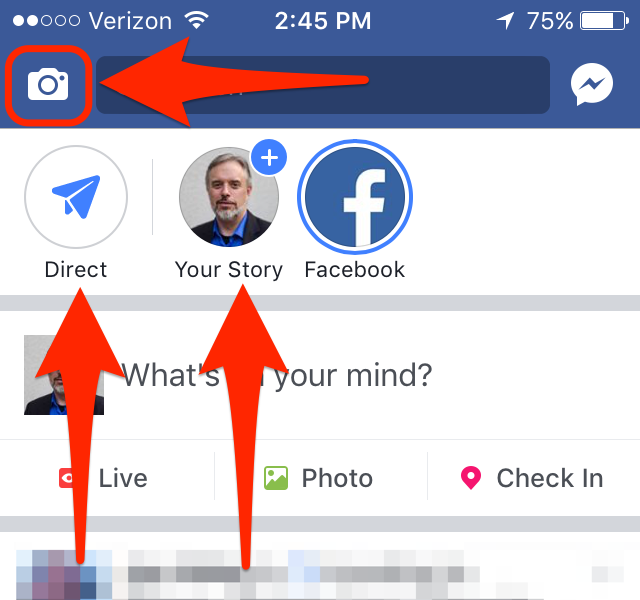 If you reload your iOS or Android app today, you should see that the top of the app has changed. You now have:

And, as mentioned before, you can now swipe to the right to access the camera. If you don't have this feature today, you should within the next day or so.

Adding "Stories" to the main Facebook app comes as no surprise. It's been clear for a while that Facebook was jealous of all the people using Snapchat and wanted to bring them back inside Facebook's shiny walled garden. Facebook had already rolled out "stories" in their other Messaging apps:

Of these, Instagram Stories has been viewed as successful. The WhatsApp and Messenger launches have been very recent and so it's not clear how many people will use them.

Over the coming months, we plan to introduce new ways for the Facebook community to create their own frames and effects that can be used on any photo or video created with the new Facebook camera. Our goal is for the camera to be a home to hundreds of dynamic and fun effects that give you new ways to connect with friends, family, and your community.

We hope that with the new Facebook camera, Stories and Direct, it will be easier than ever to see the world through each other’s eyes

While it is possible in Snapchat to create a custom "geofilter", this teaser from Facebook sounds like a great bit more.

Facebook, of course, has a huge userbase. As I wrote in my "Directory Dilemma" post a few years back, users will use an app for messaging if the people they want to communicate with use that app. And the reality is that Facebook is the center of many people's communication.

So on one level, Facebook doesn't need to differentiate from Snapchat. They simply need to provide this functionality... and hope that this keeps people from opening up the yellow ghost app.

And of course, Facebook still supports regular text posts, photos, links, all of which last longer than 24 hours. They also have Facebook Live video streaming.

This is just really a way to bring "ephemeral messaging" (messages that disappear after a period of time) inside of Facebook's walls.

The question to me is really:

how many places can people realistically post their 24-hour "stories"?

... and any other apps that are copying Snapchat right now.

The reality is that users won't post to all of them. They'll choose one... maybe two... and that will be it.

Many people will probably choose to stay right inside of Facebook's walls and use that. Or, if they are already using Instagram Stories, they may stay there.

One curious aspect of this announcement is bringing direct messaging BACK INSIDE the Facebook mobile app.

Facebook has spent a couple years now moving messaging OUT of the "Facebook" app. They have forced people to use Facebook Messenger to send and receive direct messages on a mobile device.

Now using the "Direct" inbox, we can send and receive messages inside the Facebook app again.

Granted, the messages can only be viewed twice within 24 hours - and they are in the form of images or videos. But we do have messages in the Facebook app again.

It will be interesting to see how Facebook evolves these many different messaging and "stories" channels they have.

Which will YOU choose?

If you have read this far... do you see yourself using the Facebook Stories?

Or will you stay with Snapchat? or Instagram Stories?

Or are you using WhatsApp Status or Facebook Messenger "My Day"?

Or do you just wish this whole "Stories" format would go away? ;-)

Please do leave comments here or wherever this article appears on social media.

P.S. There are many other stories about Facebook Stories appearing today.