Earlier this week I enabled "TypePad Connect" for this blog and my Disruptive Telephony blog so that you can now sign in when commenting using your "identity" from TypePad, Twitter, Facebook, OpenID, or many others. Nicely, you can also, of course, simply enter in your name, URL, etc. like you always could before on this blog. The difference is that now down above the comment field you should see this:

If you click on the "more..." link, you will be taken to a site to choose the account you want to use: 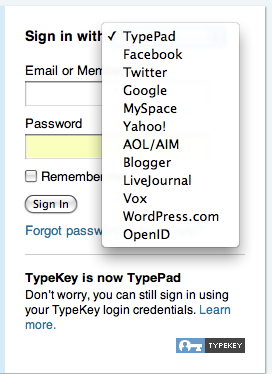 I'm particularly pleased about the ability to support OpenID, something I've written about both here and over on Disruptive Telephony, although that's not particularly surprising given Six Apart's support for OpenID in the past.

There's a larger story to be written here about TypePad Connect and how it is part of the greater battle going on both with regard to your "identity" across blogs and also where your comments are stored. The Read/Write Web had a great article on the topic a year ago when TypePad Connect first came out. For me, since both this blog and DisTel are already hosted on TypePad, the issue about having your comments reside on TypePad's servers is irrelevant, really, since they already are. Another time, though, I'll write more on the larger story.

In the meantime, feel free to leave comments through being logged into those services (and saving yourself filling out the form).

For those wanting to know more about TypePad Connect, there is a video on the main page and also previous TypePad blog posts in November 2008 and January 2009 that go into more detail.

When I initially wrote about the "United Breaks Guitars" video two days ago, it only had about 15,000 views. On his website, Dave Carroll wrote this:

At that moment it occurred to me that I had been fighting a losing battle all this time and that fighting over this at all was a waste of time. The system is designed to frustrate affected customers into giving up their claims and United is very good at it. However I realized then that as a songwriter and traveling musician I wasn’t without options. In my final reply to Ms. Irlweg I told her that I would be writing three songs about United Airlines and my experience in the whole matter. I would then make videos for these songs and offer them for free download online, inviting viewers to vote on their favourite United song. My goal: to get one million hits in one year.

No worries about hitting 1 million in one year... this morning as I write this the count is:

Under four days since it was posted July 6th! (Probably hit a million in 3 days.)

Dave Carroll obviously hit a public nerve, too, as he has now been all over the television world... CNN with Wolf Blitzer... CBC... CBS Morning Show... and comments on YouTube have indicated its popping up on TV in all sorts of different parts of the world. Mainstream media has covered him, too... some examples include the Halifax Chronicle Herald, the San Francisco Chronicle, the LA Times.

It has, of course, been all over Twitter (also another search).

His "SonsOfMaxwell" Facebook page and MySpace page chronicle some of all the ensuing craziness.

As he said in his website post, he really does need to thank United. This one little video (and only the first of three planned) has really propelled him to a global stage... no way to really know but you'd have to imagine that SonsOfMaxwell have no doubt sold a good bit of music online in the past few days (you see mention of people buying in various comments). It helps, too, that Carroll seems very honest and transparent about this whole thing and that in this case it does seem like United was clearly in the wrong, even if he didn't file his claim within the 24 hours United's policies require.

To their credit, it's good to see that United is responding. Their updates to their unitedairlines Twitter account clearly state that they are sorry, that they are working to make this right by him, and that they will be using this video for internal training purposes. The CNN video also refers to a statement from UAL.

It would be interesting to see what, if anything, United does to work with him on subsequent videos. Video #2 is apparently nearing completion, but it sounds like video #3 is still open... could be an interesting opportunity for them if they were interested. It would be fun if they invited him to sing at some United event. Externally, they seem to be putting a good face on it. Internally, no doubt some folks are cringing.

Also interesting to note that Taylor Guitars has so far been low-key on their Twitter account, not really responding or jumping into the conversations on Twitter. They did, though, post this piece about safe air travel with your guitar on their website that does not refer to Dave Carroll or the ongoing issue directly, but does give tips about how to safely travel with your guitar. That piece is also pointed to from Taylor Guitar's home page.

All in all another great example of how in the age of social media your customers are in control and, if you don't provide appropriate service, have multiple avenues to voice their frustrations.

Social media: Where brevity is appreciated, where clarity and simplicity win

This morning by way of Skype's publicist Chaim Haas, I learned of Renee Blodgett's interview with Robert Scoble Skype's chief blogger Peter Parkes (direct link to video). The interview itself was quite interesting as Peter spoke about the role blogging in particular plays within Skype and about his role as "chief blogger", as well as how it has changed since he began in 2006. Robert Scoble also gave his perspective on how corporate blogging has evolved. It was an interesting discussion.

One phrase of Peter's, though, stuck out in my mind as being so accurate about Twitter and really the whole current state of social media:

It's actully quite refreshing to be able to work in an environment where brevity is appreciated, where clarity and simplicity win.

As I wrote about way back in December 2007, using Twitter is my daily lesson in attempting brevity. As I wrote there, it's hard for an old-school trainer who wants to be sure that everyone completely understands to learn the art of conciseness and brevity. I keep trying ;-)

The full video, which is worth watching, is here:

I realized today that in the spirit of full transparency I should probably mention it here as I did over on Disruptive Telephony. My role at Voxeo has changed. I'm now "Director of Conversations" responsible for all marketing, PR, AR, media, social media, blogs, etc. I have a longer writeup over on DisruptiveTelephony.com that explains more of what is going on. The end result may be that you'll see more posts from me over on this blog. I do admit to being excited to have the opportunity to try out many of the things I write about here and we talk about on For Immediate Release. Definitely interesting times ahead...