The blurring of our lives: Does learning info about co-workers via Facebook improve connections? Or feel creepy?

At what point does all the information sharing in Facebook (and other social media) that is now visible to your co-workers cross over from being helpful in building connections between employees and move into feeling like a somewhat creepy invasion of privacy? 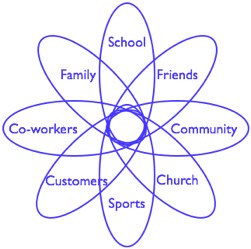 Sure, those lines have always been blurred in some fashion. Many times the people we work with are some of our closest "friends". For many people who work in jobs in a local community, the intersection of their "friends" between employees, customers, and people they know in the community is very high. The same people come into their store that they see at a local sports game... or see at the local school... or go to the same church with... or see at a local bar.

For others, the intersection may be quite smaller. Co-workers may be far away. The job may have little or no connection to the local community. Family may be scattered all over the region, country or globe. "Friends" may be fewer or may be farther apart - or may be more online. In larger communities, especially, you may go to a church on the other side of the city and have kids in a sports league in another part of the city and your office may be in yet another part of town.

The degree of the blurring has a lot to do with the size of the local community you live in and the degree of your connection to that community. You may not attend a church... or play in a sport (or have kids that do)... you may not have kids and not have the school connections.

This is particularly true with the divide between our "work" and "personal" lives. Sure, we've always shared some parts of our personal life inside the walls of our "work" environment. We've talked to our co-workers... gathered at water coolers or in break rooms or cafeterias. Some people have shared very openly about what they are doing and we've learned much about their overall personality. Others have remained very private and shared virtually nothing. To some degree, we all have a facade that we construct that is how we appear to our co-workers.

The wall between work and personal lives has been there. 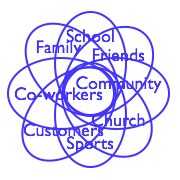 The many different contexts are blurred into one.

Now maybe this is a great thing... we all get to learn more about each other - and the person behind the facade that we construct for each context. Or maybe are we learning too much. Where is the line?

Going back to my original question at the beginning... within Facebook the "25 random things about me" meme seems to be going strong in recent weeks, at least among the people to whom I am connected on Facebook. You know, it's the "here are 25 things about me that most people don't know". We went through a whole string of memes like this out in the blogosphere a few years back and now and then they keep surfacing.

Anyway, the few posts I have had time to read in Facebook lately have actually been quite fun to read. I've learned a lot about some of the folks... remembered old stories... learned new ones. Some have been discreet in the info shared... and some have been more revealing than I would personally be.

It's that latter bit that got me thinking about all of this. What if the person sharing the "revealing" information is a co-worker? Do we understand yet how (or if) this changes our relationships? Do I gain more respect learning of a serious childhood illness now overcome? Do I lose respect for that co-worker when I learn of the drunken binges they go on each month? What if I don't like their politics or religion? Does any of this change the way I interact with the person? On one level, how can it not change my views of that person? - but can I/we move beyond that?

Have our "culture" and "conventions" caught up with the degree of information our tools now let us share?

Where is the line between information we share with co-workers and our "personal" lives? Is there even a line? Or is the very concept of such a line just a quaint anachronism of another era?

P.S. For my own part, I assume there is no line and continue to follow the mantra: "Never put online (anywhere) anything you would not want to appear on the front page of the New York Times." Perhaps that limits my "openness", though...

The Decline in Formality: Where have all the neckties gone?

As someone who has been involved in public speaking, training, PR and other aspects of marketing/communication for close to 20 years, I've come to appreciate that the manner in which you dress does have an impact on how you are perceived by your audience. Working for much of the 1990's in the suit-and-tie culture of Boston, I've also watched the changing fashions for men... as suits have given way to first "business casual" and now seemingly to simply "casual". Not everywhere, of course, but in general.

Still, I admit to being a bit surprised when I saw the news conference last week in New York City announcing the Google Android handset made by HTC and operating on T-Mobile's network. Here you had top executives from Google, HTC, T-Mobile USA and T-Mobile Germany all sharing the stage... and what's missing?

Now, granted, the main force behind the press conference is Google with its very casual San Francisco Bay Area culture. And when the two Google founders took the stage at the end of the conference, they were predictably casually dressed.

But T-Mobile? (a.k.a. the mobile subsidiary of Deutsche Telekom?) And HTC out of Taiwan/Asia?

Perhaps I shouldn't have been surprised given the success of Apple keynotes... :-) Or some of the recent Microsoft product launches I've seen... or for that matter many of the conference keynotes I've seen recently.

Still, I admit to finding it an interesting sign of the times. Four high-level executives at a New York news conference (the land of lawyers and finance)... all wearing what looked to be close to suits - but without ties.

I know that ties are still worn in many industries and in many regions of the world. But I somehow wonder if their time is limited. I recall reading earlier this year that the industry association for tie manufacturers shut down. (Two links: here and here.) You see ties increasingly rarely... perhaps it's only a matter of time before more manufacturers either close or are absorbed into larger ones.

Count me as one who laments the fading of the tie. Sure, in many ways they are silly pieces of fabric that you would loop around your neck. Sure, if you didn't have the right size neck collar on your shirt, wearing a tie could be uncomfortable. Sure, it was one more thing you had to do to get dressed in the morning. (and how many of us always got the tie right the first time we tied it?)

But still, there was something about wearing a tie... putting one on marked the transition into "work mode"... just as taking one off at the end of the day marked the transition out of work and into a more casual time. There was also something about the degree of "respect" you were showing for whomever you were meeting. You were getting "dressed up" for them... not just meeting them in regular everyday clothes.

I think it's sad, in many ways, to see the fading. Is it a pendulum swing? Will the next generation rebel against the total casualness of many business environments and bring back the tie? Or will the necktie simply join the formal hat as a vestige of a bygone era...

[I, of course, work out of a home office where wearing a tie would admittedly be a bit ridiculous. But even when I travel and speak at conferences, I've found myself more often wearing the jacket-and-black-shirt motif versus a necktie. I do, though, have something like 50 ties lurking in a closet...]