The Decline in Formality: Where have all the neckties gone?

As someone who has been involved in public speaking, training, PR and other aspects of marketing/communication for close to 20 years, I've come to appreciate that the manner in which you dress does have an impact on how you are perceived by your audience. Working for much of the 1990's in the suit-and-tie culture of Boston, I've also watched the changing fashions for men... as suits have given way to first "business casual" and now seemingly to simply "casual". Not everywhere, of course, but in general.

Still, I admit to being a bit surprised when I saw the news conference last week in New York City announcing the Google Android handset made by HTC and operating on T-Mobile's network. Here you had top executives from Google, HTC, T-Mobile USA and T-Mobile Germany all sharing the stage... and what's missing? 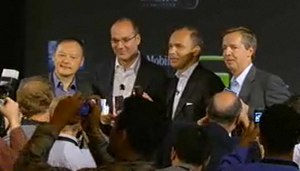 Now, granted, the main force behind the press conference is Google with its very casual San Francisco Bay Area culture. And when the two Google founders took the stage at the end of the conference, they were predictably casually dressed.

But T-Mobile? (a.k.a. the mobile subsidiary of Deutsche Telekom?) And HTC out of Taiwan/Asia?

Perhaps I shouldn't have been surprised given the success of Apple keynotes... :-) Or some of the recent Microsoft product launches I've seen... or for that matter many of the conference keynotes I've seen recently.

Still, I admit to finding it an interesting sign of the times. Four high-level executives at a New York news conference (the land of lawyers and finance)... all wearing what looked to be close to suits - but without ties.

I know that ties are still worn in many industries and in many regions of the world. But I somehow wonder if their time is limited. I recall reading earlier this year that the industry association for tie manufacturers shut down. (Two links: here and here.) You see ties increasingly rarely... perhaps it's only a matter of time before more manufacturers either close or are absorbed into larger ones.

Count me as one who laments the fading of the tie. Sure, in many ways they are silly pieces of fabric that you would loop around your neck. Sure, if you didn't have the right size neck collar on your shirt, wearing a tie could be uncomfortable. Sure, it was one more thing you had to do to get dressed in the morning. (and how many of us always got the tie right the first time we tied it?)

But still, there was something about wearing a tie... putting one on marked the transition into "work mode"... just as taking one off at the end of the day marked the transition out of work and into a more casual time. There was also something about the degree of "respect" you were showing for whomever you were meeting. You were getting "dressed up" for them... not just meeting them in regular everyday clothes.

I think it's sad, in many ways, to see the fading. Is it a pendulum swing? Will the next generation rebel against the total casualness of many business environments and bring back the tie? Or will the necktie simply join the formal hat as a vestige of a bygone era...

[I, of course, work out of a home office where wearing a tie would admittedly be a bit ridiculous. But even when I travel and speak at conferences, I've found myself more often wearing the jacket-and-black-shirt motif versus a necktie. I do, though, have something like 50 ties lurking in a closet...]