Is cursive handwriting a dying art?

When is the last time that you wrote in "cursive" handwriting? (a.k.a. "longhand")

Was it recently? Did you scribble a note to yourself or to a friend? Did you write something down in a notebook you carry? Did you need to write notes (or a prescription) as part of your work? Did you... (gasp!)... actually write a letter to someone?

I thought of all this last night as I was working through one of my various "boxes" in preparation for our impending move. Perhaps you are more or less "clutter-free" like my wife, but I'm not... and I have several boxes of various accumulated things that I'm committed to work through before we make the move, saving critical things and recycling the rest. Anyway, last night's box was full of... letters. Letters from friends... letters from my parents... letters from grandparents... from friends of the family... a few from old girlfriends... a few from acquaintances I now only vaguely remember... and a huge number of letters and cards from my wife.

It was fun... fascinating... sometimes incredibly emotional (like when I found the letters from my now-deceased grandparents on my mother's side)... humorous... inspiring (a friend writing from his Peace Corps work in Central America)... touching... romantic (my wife and I began our relationship before the era of heavy email usage ;-)... and many more emotions.

The various writing styles were intriguing as well. Some were in small, tight compact script. Others were larger and looser. Some were in block print. Most were in cursive. Some were a mixture. Some were obviously written quickly while others at least appeared to have been written with more care. (Or the writers just have great penmanship.) Some were extremely legible and easy to read while others were... um... "challenging". All of them showed the unique, individual style of the writer. As I worked through the box, it was incredibly easy to say "Oh, here's another one from _______". The writer's style... their identity... was easy to see.

Not for the first time I found myself wondering...

have we lost something fine as we have moved to electronic text?

Oh, certainly we can send email messages or IMs that are as equally fun, touching, humorous, inspiring, romantic, etc. In the 23-ish years that I've been using email (starting around 1985), I've certainly sent and received all sorts of email comparable to letters. And certainly there is a "writing style" that comes through in email/IM messages that is distinctive to individuals. (Although one wonders how much distinction there will continue to be as we move to ever-shorter messages.)

But what is missing is the physical uniqueness of handwriting. Sure, you can use different fonts in email to make your message "different" from others, but: a) half the time those fonts don't make it through to the recipient; and b) you are still choosing from among a certain set of fonts included in your system, i.e. the font is not unique to you.

With handwriting, everyone has their own unique font/typeface.

No one else in the world has handwriting exactly like mine. There are two many variables involved in the creation of the individual letters. The way you hold the pen. The pressure you exert against the paper. The way you connect the letters together (or not). The style of your descenders. The shape of your loops. The way you make punctuation. There is a unique identity associated with... you. Hence why we have used handwritten signatures to assert our identity in signing forms. (And hence why generations of criminals have worked at forging those signatures and handwriting.) 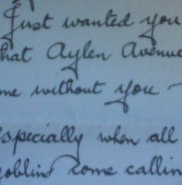 And yet are we losing this uniqueness?

A few weeks back I stumbled upon some other letters that included one written by a former neighbor in Ottawa who was, I recall, in her 80's when we left there in 2005. Her handwriting was beautiful. (Snippet in the image to the left.) There was a style and a grace that I've actually seen often in writing from people of that era. To a certain degree I wanted to write back to her just to get another letter in return in that beautiful script.

Yet how often do we actually write by hand these days? As you might infer from above, I wrote tons of letters in earlier years. Today, I almost never write letters by hand. When was the last time you received a hand-written letter? My mother, bless her heart, still sends them from time to time and while I admittedly don't reply back in writing, I do value them. (Please don't stop, Mom!) A friend from long ago also sends me one very rarely with his news. But that's about it.

Outside of letters, it probably comes as no surprise that I have written in journals for decades. I have many, many journals in various forms with the pages covered in my handwriting. Yet since I started blogging in May 2000, I hardly ever write in my paper journal anymore. (I "write" in my "journal", but it's all online.) A paper journal that I might previously have filled in a few months now may last for years at my current pace of writing in it.

We have left handwriting behind.

Even more so, I have had a sense in reading some various articles (that I need to find again) that we are leaving cursive handwriting behind. That we are increasingly printing our letters and not connecting them in a cursive script. I notice this even in my own notes for work. In the notebook where I jot notes from various meetings, events, etc., a great amount of my notes are written in a "block print" style. Using upper and lower case... but not connected in a cursive style. Actually, my notes are somewhat of a mishmash that mixes cursive writing and printing... sometimes even on the same line.

(What do your work notes look like? Cursive? Printed? A mixture? Or do you not even write any notes and keep them all on your computer?)

I wonder, too, about the generation coming up through the schools now. In an era when there is so much focus on the electronic world... when kids are texting and IM'ing... when they are doing all their reports on the computer... when they are using computers in their classrooms... how much hand writing do they actually do? Do they even teach cursive handwriting like they did when I grew up?

On a certain level, is it even relevant to the digital world in which these kids are growing up?

I don't know... perhaps cursive handwriting is destined to go the way of manual typewriters, fountain pens and so many other anachronisms from another time. Perhaps it will live on only in those of a certain age and those who have an interest in preserving dying arts. I don't see any real way for it to return... as I noted earlier, even a fan of handwriting like me has moved increasingly online.

But as cursive handwriting fades, are we as a culture losing something fine with its passing?