What Obama Said Last Night in SOTU Speech, Versus What America Heard

Fascinating piece on the New York Magazine site today showing the Wordle cloud for the text of President Obama's State of the Union (SOTU) speech last night... versus what NPR found people remembered in a survey after the speech. Click on the image below to see the full text and images... and also check out the original NPR article, too, which breaks down the word clouds by political affiliation. Amusing to see. 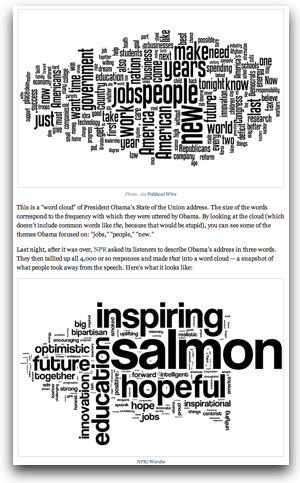 P.S. I should note that the White House also has a blog post up with this word cloud... well, at least the first one! ;-)

After writing my post last week about "w00t" being Merriam-Webster's "Word of the Year", I was mildly amused to be contacted by a reporter for Newsweek who was writing a human-interest story on the word and had found my blog entry via Google. The article is now out: "W00t! There It Is" We had a great conversation although she did not quote me in the article. She also spoke with Julia Roy who was quoted and twittered that fact. (But Julia, what's with using "sah-weet" in your tweet instead of "W00t!"?) Anyway, it was a fun little example of how the random oddball things you write can sometimes make the strangest (and useful) connections.

Okay, maybe I'm just a linguistic pedant, but I just don't find myself sharing Julia Roy's joy at the fact that Merriam-Webster has annointed "w00t" (with the zeroes) their "Word of the Year" for 2007! But then again, I didn't really like "ginormous" being added to the M-W dictionary, either. I know, I know... "languages evolve"... I should just deal with it. Sigh.

To be fair, M-W is not adding "w00t" to their "official" dictionary - at least not yet - and this "Word of the Year" was "based on votes of visitors to our Web site", which of course will skew any poll that you run. (Although it is in their online "Open Dictionary".) I did enjoy some of the runner-ups on Merriam-Webster's list. Somewhat predictable that "facebook" would be on there, but fun to see "conundrum" and "quixotic".

I think, though, the M-W folks are showing their age when they talk about "l33t" being "an esoteric computer hacker language". They obviously have not spent any time with teenagers who are madly texting each other. (Although I suppose those who wish to get pedantic about Leet might say that texting and true "leetspeak" are different, but I'd argue there's a good bit of crossover.) It does, however, warm this linguist's heart to see someone actually using "esoteric". Nice word.

The curious case of the lowercase "g"... and my, how resources available to parents have changed...

A conversation at 5:30am this morning:

It turns out that she was talking about the loop at the bottom of the lowercase letter "g" that appeared in one of the books she has been learning words from. Looking up the letter G in Wikipedia did in fact bring up this interesting (to me) little bit of typography. If you look through the various letters, the lowercase "g" is really the only case I know of where we have common usage of a very different letter from a typographic point-of-view. (Well, another case might be the uppercase W.) Many if not most letters have common variations with and without a serif (the line on the top or bottom of a "stem" or main "stroke" of the letter, for those not accustomed to typographic terms). But I can't really think of another letter that varies as much as the lowercase 'g'. A quick survey of some of my daughter's books shows that the g does have a "squiggle" or loop at the bottom of it in some common fonts.

From the Wikipedia article:

The modern minuscule (lower-case) G has two basic shapes: the "opentail G" and the "looptail G" . The opentail version derives from the majuscule (capital) form by raising the serif that distinguishes it from a C to the top of the loop, thereby closing the loop, and extending the vertical stroke downward and to the left. The looptail form developed similarly, except that some ornate forms then extended the tail back to the right, and to the left again, forming a loop. The initial extension to the left was absorbed into the upper loop. The looptail version became popular when printing switched to "Roman type" because the tail was effectively shorter, making it possible to put more lines on a page. In the looptail version, there is a tiny flick at the upper right which in typography is called its "ear".

As I looked through our daughter's books and also looked online, it seems that all the more recent books seem to use the "opentail G" without the loop/squiggle. The particular book where she pointed this out was an older Richard Scarry book ("Best Little Word Book Ever") and the same font seems to be used throughout the "Golden Books" series of "classic" children's books. It was also present, though, in other books.

On one level, it was an interesting discussion to have with my daughter (although we could have had it a bit later in the day, really) and an interesting pointer to me to notice the typography in books she is looking at... because she will notice it.

It was also interesting to think about how resources available to parents have changed as well. When confronted with the inevitable "I don't know why it's different", I simply jumped online, went to a site (Wikipedia, in this case) and looked up the info. Fascinating world we live... and that's the world my daughter and her peers will be growing up in!

Here's some humo(u)r to start your week back after the (North American) holiday.  Since I know from comments that a number of my readers are Canadian, I thought I'd just pass along to a link to a piece I posted last Friday:  "How to talk like a Canadian - a 12-step program".   It came about after a fellow podcaster said he wasn't sure about going to a conference in Canada because "his Canadian was rusty".  A number of Canadians actually helped me improve it a bit.  It's posted on my old "North of 45" blog that I used to chronicle our time living in Ottawa from 2000-2005 (north of the 45th parallel).

Does Merriam-Webster adding "ginormous" to their dictionary bother anyone else?

Is anyone else bothered by "ginormous" being added to the Merriam-Webster dictionary?  Last week, the pedantic linguist (or is it "linguistic pedant"?) in me cringed when I heard the news that "ginormous" was among the 100 new words added to the M-W collegiate dictionary.

I mean... are they serious?

Obviously they are and had this to say:

“There will be linguistic conservatives who will turn their nose up at a word like `ginormous,”' said John Morse, Merriam-Webster's president. “But it's become a part of our language. It's used by professional writers in mainstream publications. It clearly has staying power.”

Okay, perhaps I'm a "linguistic conservative" but I think my major issue is that "ginormous" just sounds stupid!  The article goes on:

Visitors to the Springfield-based dictionary publisher's Web site picked “ginormous” as their favorite word that's not in the dictionary in 2005, and Merriam-Webster editors have spotted it in countless newspaper and magazine articles since 2000.

That's essentially the criteria for making it into the collegiate dictionary — if a word shows up often enough in mainstream writing, the editors consider defining it.

Intellectually, I understand.  Languages are living things that evolve over time.  A good dictionary will attempt to keep pace with the times.  So I understand it at that level, but still....  ginormous?

But as editor Jim Lowe puts it: “Nobody has to use `ginormous' if they don't want to.”

Yes, you can count me as one of those, too.  I have an extremely hard time ever imagining a circumstance in which "ginormous" would leave my lips or be something I wrote.