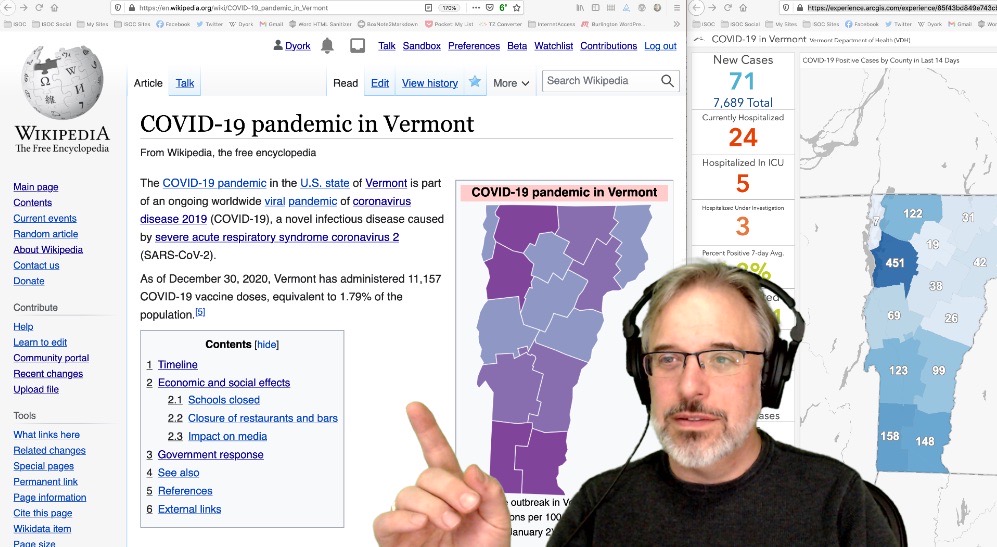 Every night… usually sometime between 8:00 and 10:00pm US Eastern time, you can usually find me streaming on Twitch (danyork324) while … editing Wikipedia! 😀

If you’d like to learn more about Wikipedia editing - or just want to chat - you are welcome to follow me at danyork324. I am usually streaming Wikipedia editing… or occasionally recording a podcast episode or testing out new livestreaming software or equipment. I should warn you that I’m typically not on very long, often only 15-30 minutes. Sometimes an hour, but usually much shorter.

[Note: In 2021, I might try to move these streaming/editing sessions back to more around lunchtime US Eastern (where they first started last year). I’m also doing some research/thinking into how to sleep better.. and being online streaming right before going to bed may be something I seek to change.]

This all started back on March 20, 2020, as something I wanted to do to distract myself from the chaos that was unfolding then with COVID-19. The Governor of Vermont had just declared a state of emergency. He had just issued a “Stay at Home” order starting on March 17. The news was filled with crazy reports about the virus all around the world. Hospitals were gearing up for the disaster.

In the midst of all of that, I decided I needed something to take my mind away from the emerging pandemic.

So I looked at the various things I’d been wanting to explore. One of them was to dive in to Twitch to understand more about how it all worked. I’ve been livestreaming for years to YouTube Live, to Facebook, and to various other channels. But I’d never done anything with Twitch and wanted to give it a try. I also wanted an excuse to play with OBS Studio for producing live streams. I’d used other programs such as Wirecast, but never the free and open source OBS Studio.

So… what to stream? I haven’t (yet, anyway) spent any real time playing online games, which is a huge amount of what gets streamed on Twitch.

It turns out that there is a very large part of Twitch that was historically tagged “IRL” (In Real Life) or “Creative”. This includes people playing music, doing crafts, programming / coding, giving tutorials, and recording podcast episodes or talk shows.

None of that is anything I do consistently, except for occasionally recording podcast episodes.

But I thought of something I did want to explore more - the world of Wikipedia!

I’ve had an account on Wikipedia for over 16 years. But after making some initial edits in 2004, 2005, and 2006, I really made very few edits, and had lost touch with much of what had evolved in the Wikipedia community in terms of conventions, processes, etc.

It so happened that the Wikipedia community was looking for people to help update pages about the COVID-19 / coronavirus pandemic - and not much had been done with the Vermont page yet. So I thought to myself… here’s a way I can: 1) help Wikipedia; 2) feel like I’m doing something to help provide info about COVID-19; 3) learn more about livestreaming; 4) learn more about Twitch; and 5) give me a consistent distraction during this crazy time.

Remarkably, I’ve done both editing and streaming every single day since March 20, 2020! It’s just become part of what I do. (A couple of times I streamed something else (like a podcast episode recording) and then did the Wikipedia editing separately and not on a stream, but those were exceptions.)

I begin each stream with updating the Wikipedia page about COVID-19 in Vermont to have the latest stats from the Vermont Department of Health. Then I dive into my “Watchlist” of pages I “watch” and spend time making updates, finding edits from spammers (and reverting them), providing opinions on various topics, and welcoming new users to Wikipedia.

How long will I keep doing this every day?  I don’t know. Probably at least through March 20, 2021, to finish out a year of doing it. But perhaps longer since the pandemic seems to be continuing. It’s quite honestly become a fun thing to do and learn - and the daily consistency helps me keep doing it.

I realize I’ll never be in the “list of most-followed Twitch channels” 🤣, but I’ve learned a HUGE amount about Wikipedia and the community, as well as about Vermont and many other topics. I’ve met some other Wikipedia editors through the process, including a couple who stop by the Twitch chats and offer comments. I’ve also learned a HUGE amount about live streaming  - and about Twitch. At some point I’ll publish a post with some of what I’ve learned.

In the meantime.. you can find me there on Twitch each night.. helping in some small way to keep Wikipedia up-to-date.